Lhasa rules don't apply here. Click this link, and catch a breath of the fresh air of psychic freedom from Buddhist authority. If you haven't tried breathing outside the sterile domain of orthodoxy, step inside. It'll clear your head and free your mind.
Post Reply
2 posts • Page 1 of 1

How long can Shambhala claim ignorance of child abuse that happens in its centers? Twenty-two years, in the case of Michael Smith, arrested after he turned himself in to the Boulder Sheriff on June 28, 2019 on charges of sexual assault on a child by one in a position of trust as a pattern of sexual abuse. The Interim Board was quick, however, to issue its claim of ignorance in a missive to the faithful, brimming as usual with sanctimonious denials of responsibility:


The Interim Board wrote:Neither the Shambhala Interim Board nor the International Care and Conduct Panel were aware of any incidents involving Michael Smith prior to his arrest on June 28, 2019.


Let's face it -- that's why they have an Interim Board -- because it doesn't know anything about what happened anytime prior to its appointment. It's also why they disbanded the Kalapa Council -- it "knew too much." And what is this "International Care and Conduct Panel" but another paragon of ignorance? Of course, now that the Interim Board "knows" about this event of child abuse, they are eager to convey their total commitment to doing right in the future:


Interim Board wrote:Shambhala officials, teachers, and office holders, as well as general members, need significantly more training on proper reporting of misconduct. As well, Shambhala should never attempt to handle crimes such as sexual assult and child abuse internally

The fact is, of course, that the Boulder Shambhala had dealt with the problem through its local Care and Conduct policy, administered by one of Shambhala's finest Desungs, Dennis Southward, who has been teaching Shambhala students the "Desung Path" for many years. In October 2015, he taught "Entering the Desung Path" at Karme Choling. The description of the class leaves little doubt that Southward's elevated position as a religious leader makes him a "clergyman" who is subject to Colorado's mandatory reporting law:

"Desung" means bliss or harmony protector. Desung practice is a profound path arising out of the Kasung tradition. It consists of protecting access to innate wisdom by embodying generosity, gentleness and fearlessness in our daily lives. This state of "being" is made possible by increasing trust and confidence in our basic goodness and that of the society in which we live. All situations are viewed as workable, and distress is recognized as a powerful opportunity to open to our basic goodness.

This program is open to Shambhala council members, Guides, Meditation instructors and people in the community who are interested in learning to work with difficult situations. Members of the Dorje Kasung are especially encouraged to attend. This weekend program is a prerequisite for Dorje Kasung who wish to apply to be members of the Desung Arm. The training also provides further depth to the profound path of the Dorje Kasung.

-- Entering the Desung Path with Dennis Southward and Jan Jercinovic

How did Desung Dennis Southward display his grasp of the "further depth of the profound path of the Dorje Kasung?" By victim-blaming, of course!


Joshua Eaton at Religion News wrote:Southward told police in May that a young woman was “exploring her own sexuality” when she was sexually assaulted more than a decade ago at age 13 by another man in the group and that her “exploration” fed the man’s addiction to pornography, according to a police incident report.

The official, Dennis L. Southward, 70, also told police that the woman “could do a lot of damage” to an important member of the community if she pressed charges against her alleged abuser, 54-year-old Michael Smith.

“Southward also pointed out that this incident occurred several years ago and that Smith is a business owner who is still involved in the Shambhala community within Colorado,” the police report says.

Southward went on to say that police needed to tell Smith’s accuser about the counseling he received after allegedly assaulting her.

The remainder of the article leaves little doubt that Southward was a smooth-operator, able to spread oil on troubled waters, satisfying the victim's father with his resolution of the problem:


The woman told one of her school teachers and a close friend of her mother about the abuse in late 1998, according to the police report. The teacher reported the incidents to police, but the family decided not to pursue criminal charges and instead called Southward, who was a leader in the Boulder Shambhala community.

“(Southward’s) role in the Shambhala community was the person who deals with family conflicts or domestic violence issues within families,” the accuser’s father told police, according to a summary of his interview with police that is contained in the incident report.

“(The woman’s father) described Dennis Southward as ‘the rock’ and the one you would call for situations like the one they were dealing with,” the interview summary continued.

Another person interviewed by police described Southward as “having a health and well being role within the Shambhala Buddhist community.” Southward himself told police that “he is known throughout the Shambhala Community (sic) as someone who will address issues.”

The woman’s father spoke favorably of Southward in his interview with police, calling him a “good friend.”

What Shambhala is completely avoiding talking about is that Desung Southward was obliged by Colorado law to report the crime because he is a member of the "clergy". The Colorado Child Protection Act of 1987 was clearly in effect in 1997 when the abuse occurred. See this case reported in 1996, referring to a therapist's duty to report abuse under the law at page 1321: Dill v. People 927 P. 2d 1315 - Colo: Supreme Court, 1996. Furthermore, the failure to comply with the mandatory reporting duty exposes Southward and Shambhala (whose agent he was) to tort damages under the statute: "Any person who willfully violates the reporting mandate commits a class three misdemeanor and "[s]hall be liable for damages proximately caused thereby." § 19-3-304(4)(a)-(b)."


When Do Pastors and Clergy Have to Report Abuse?

-- Mandatory Reporting of Abuse: Is Clergy Included in Denver?

By failing to report Smith to the police in Denver, Shambhala and Southward enabled him to predate on the children of other Shambhala members:


Religion News wrote:Boulder police say they also have been contacted by another woman, who alleged that Smith sexually assaulted her when she was 11 years old at Karme Choling, a meditation center that Shambhala International operates in rural Caledonia County, Vermont. Authorities in Vermont are investigating that allegation.

Why did the woman in Vermont, now in her thirties, come forward with her complaint? Because she knew that the law would do something about it.


Religious News wrote:Police said the two survivors do not know each other and that the women came forward after police in Boulder arrested former Shambhala teacher William L. Karelis, 71, in February for allegedly assaulting a 13-year-old girl he met through the Buddhist group.

Whether this is the tip of an emerging iceberg we do not know. A lot will depend on the willingness of victims to come forward, and if the Catholic Church's slow disintegration under the corrosive effects of sex abuse claims is any indication, it may take many more years for enough injured victims to step forward into the light. Meanwhile, Shambhala is playing its cards very close to its chest. But as each one is revealed, the inept handling of the crisis makes it clearer that whatever bliss this Buddhist group has been enjoying has been founded on willful ignorance of the rot at the root.

Edited at 7/2/2019 to correct an error in the penultimate paragraph regarding which victim was prompted to come forward by the Karelis arrest.
Top

Re: Shambhala Dodges Mandatory Reporting Duties That Expose it To Tort Damages in Boulder Child-sex Case

As noted above, Dennis Southward was a Desung who did a lot of classes on "The Desung Path," including teaching a class at Karme Choling in 2015. See screencaps below, taken to preserve the evidence, because Shambhala has already scrubbed Southward's name from virtually all of these pages, something their IT team has apparently written a script for, in these days when it's important to disappear the truth tout suite. 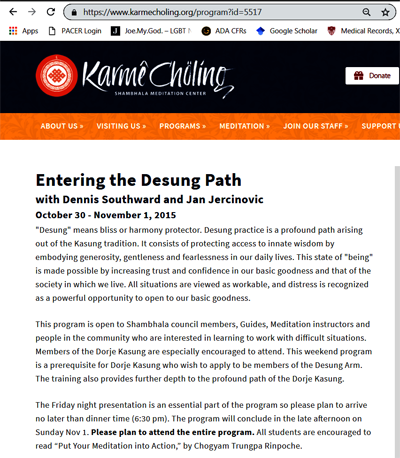 Finally, the site-specific search for Tucson and Southward: 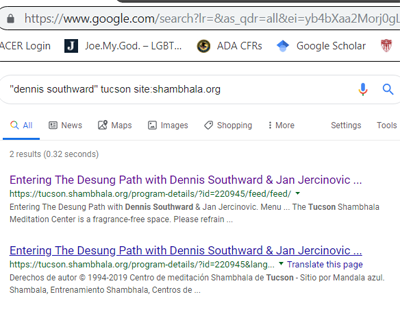 Just how important to teaching the "Desung Path" was Southward? Well, a site-specific search of "Desung Path" produces only a few more hits than does a search for "Dennis Southward," and it appears that Desung Southward was the main teacher of Desungs for many years, with the only other identifiable teachers being Dan Peterson, Kristen Mullen, Laura Burnham, Deborah Coats, Sarah Lewis, and Nicole Arsenault. Desung Southward clearly did more Desung teaching than any other Shambhala Desung. 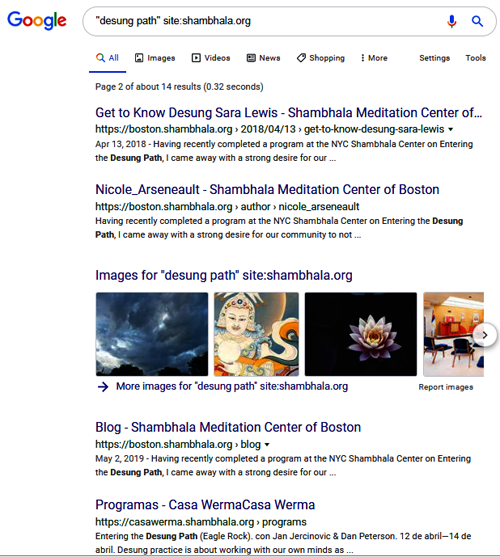 Searches for "Dennis Southward" at ShambhalaTimes.org reinforce the conclusion that the International Care and Conduct Panel is lying when it says it didn't know about how Southward handled the Michael Smith's child molestation in Boulder:

Emily Sell, Sakyong Mipham Rinpoche’s editor, recalls how the composition of the Treatise on Society and Organization occurred:

“I was just settling into an airplane ride when someone sat down in the seat beside me. It was Rinpoche. He had moved from first class to coach in order to dictate a letter to the President. I believe it may have been inspired by a conversation with Dapon Dennis Southward the night before."

-- "The Sakyong has something for you"

Dan Peterson, Desung Care and Conduct Officer in Shambhala Times wrote:I have condensed something Dapon M Dennis Southward said years ago at a Desung Training in Boston. It is something of a Desung slogan for me.

The war is over.
We are surrounded by the phenomenal world.
Our job is to surrender,
And to make offerings.

Dan Peterson in Shambhala Times wrote:The desung arm has developed rapidly in the last several years – perhaps because it is meeting a genuine need in the Shambhala community. What factors have contributed to this growth and have influenced the form that desung practice is taking?

I think Dennis Southward, Dapon M, started a really good model in Boulder, showing how desung can function in the community and actually care for people.

For a quote straight from the horse's mouth, let's consider what Southward himself told the police about his Desung role:


Joshua Eaton at Religion News wrote:Southward himself told police that “he is known throughout the Shambhala Community (sic) as someone who will address issues.”

Since we can assume that Desung Southward had some input on the course description posted at the Karme Choling website, it's fair to say that this statement expresses how he did his work as a Desung:


Desung course description wrote:All situations are viewed as workable, and distress is recognized as a powerful opportunity to open to our basic goodness

Finally, while this link has been scrubbed, what's visible on Google at this site-specific search at Shambhala.org for "desung path" + "care and conduct" is just this fragmentary snippet, which is nonetheless illuminating:


Jan 12, 2019 - Friday Evening Talk: Entering the Desung Path with Dennis Southward ... Desung are especially versed in the Care and Conduct protocols... that

Adding up what we've learned and drawing a conclusion:

Thus, it is quite likely that Southward was one of the key victim silencers in Shambhala, the "go-to guy" when claims of abuse arose, who may have acted as a trouble-shooter to deal with victims nationwide, as well as an adviser to victim-silencers throughout the organization, who bear the title of "Desung." In other words, when it came time to circle the wagons, Southward was at the head of the parade.

For a personal injury lawyer seeking to "dig up the whole graveyard," the way forward would be clear:

This is what justice demands.
Top
Post Reply
2 posts • Page 1 of 1