THANKS FROM A GRATEFUL NATION: AWARDING THE CROSS OF SECRET ACHIEVEMENT TO THE DALAI LAMA
by Charles Carreon 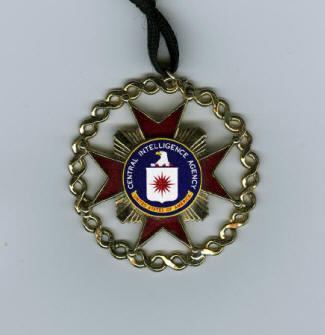 The 14th Dalai Lama has been a friend to American interests for his entire adult life, since he abdicated his throne in order to save his people from the dangers of .... Well, okay, it didn't turn out very well for the Tibetans, but he did save his skin, his stash of cash, and a lot of reactionary Tibetan oligarchs who came with him. Fortunately, the Central Intelligence Agency of the United States of America was able to provide him with employment as soon as he arrived in India. Since then, he has reliably made himself a thorn in the side of the Chinese, giving the United States the leverage it has needed to build an arms-length trading relationship that now supplies us with enough borrowed money to buy all the microchips, flat screens, cell phones and cheap clothing we could ever want. While his aspirations to someday "return to Tibet" are unlikely to be fulfilled, his mission on behalf of America has been far more successful, and with the installation of numerous "tulkus" on the boards of nonprofit organizations throughout the United States, the exchange has been more than fair. His country has infiltrated ours, and our country has used his people to the best advantage. For this, we commend him, and with heartfelt thanks award him the Cross of Secret Achievement.
Top
Post Reply
1 post • Page 1 of 1