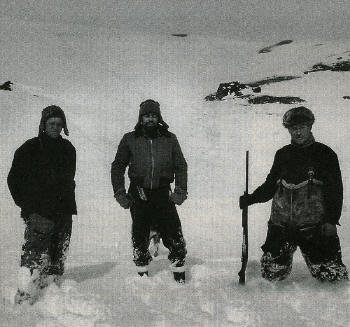 Douglas Mackiernan (standing in the middle) against a snowy landscape not unlike that across which he attempted to flee the Communists. He was proud of his new beard and swore he would not take it off until he and wife Pegge were together again. (Courtesy of Peggy Hlavacek)


-- The Book of Honor: The Secret Lives and Deaths of CIA Operatives, by Ted Gup

Heinrich Harrer spent months climbing the Himalayas, escaping from the British in India, then settled in for seven years in Tibet, where he allegedly mentored the Dalai Lama in the ways of the world. Douglas Seymour Mackiernan also had a hard trip to Tibet, fleeing from hostile forces. In July 1949, Mackiernan was a dedicated CIA man operating under State Department cover in the town of Tihwa, in China's remote Xinkiang province. Mackiernan and four other men, an American and three Russians, escaped from Tihwa just ahead of Mao's triumphant forces. After a two-week respite at Lake Barkol by the Mongolian border, they launched into their trek across a frozen, high-altitude wasteland, the Taklimakan desert, called "White Death," slowly making their way to the Tibetan border.

Along the way, Mackiernan, who was the custodian of several kilos of gold bullion and two machine guns, had some occasional high times, getting put up in big yurts by Kazakhs, who well respected his manner of dealing. Mackiernan commanded the loyalty of the rest of his crew, consulting star maps, checking his compass direction with alternative instruments, all while fending off 60 mph winds at 16,000 foot altitudes. Along the way, he drew strength from remembering that his father had been stranded at the North Pole. Further, he consoled himself that, unlike his father, who waited two years eating sea mammals and bearing glacial cold while awaiting rescue in a frozen waste, he could fight across the frozen wasteland and make his way back home.

Mackiernan was good with animals, after a fashion, having the foresight to retain only carnivorous camels for the trek, trading away grass-eaters promptly. In the Takliman, game was easy to hunt, but grass hard to find; thus, even the camels had to eat meat.

Most importantly, Mackiernan maintained discipline, hooking up his radio and providing regular reports to the Agency. Through the radio, he contacted Washington and requested them to contact the Dalai Lama and arrange entry at the border and safe conduct to Lhasa for himself and his men. After a time, Washington confirmed that the Dalai Lama was in on the plan, and had dispatched messengers to all the border crossing locations.

When Mackiernan arrived, communications with the Tibetans were brief and ambiguous. First a girl came out and showed them her tongue and smiled. She went back. Some Tibetans limbered up their rifles. Mackiernan prevailed upon his fellows to try waving white flags and advancing all together with their hands up. The gambit failed. Mackiernan and two of the Russians were shot and quickly thereafter decapitated, as were some of their camels. The American and one Russian survived, and when the error was discovered, the guards realized they had screwed up, and took the survivors to Lhasa. Along the way, they met the Dalai Lama's messengers, who gave no explanation for their delay in conveying the God King's orders to the border guards, but offered to have the head of the guards killed. The survivors demurred from this cavalier offer of blood satisfaction, and were happy enough to reach Lhasa alive.

Mackiernan's body now lies under a pyramidal cairn in some unknown location along what was the Sino-Tibetan border, along a precisely-charted path from Xinkiang to Lhasa. There are many such cairns in that area, and they are used as landmarks and navigation aids. No doubt Mackiernan would appreciate knowing he helped others find their way in the wilderness that tried, but could not quite, claim his life. It took fellow human beings to do that.

We can all draw a lesson from Mackiernan's fate at the hands of people whom he, an astute judge of men, completely misunderstood. He was not the type of man to take good intentions for granted, and as Ted Gup's account records, left Tihwa with a .30 caliber pistol on his hip, and a carbine over his arm. Undoubtedly he dealt with the tribesmen of the frozen deserts with manly reserve, keeping arms in easy reach. Mackiernan was no fool, but he was fooled by Tibetan mystical glamour into approaching armed men who had already fired shots in their direction after sending an unarmed girl to do reconnaissance on them. Obviously, this was a test. Bad people would have kidnapped the girl to hold her hostage. That kind of behavior, the border guards would have understood. One would expect that Mackiernan, who would not have sent a child to perform diplomatic communications, would have judged the Tibetans harshly for using this tactic.

Other options than proceeding unarmed waving white flags were available. Two machine guns were at hand -- enough to neutralize any threat likely to appear at close range when faced by men with bolt-action weapons. Gold also was available to forge a safer basis for communication. They could have given the girl some gold to take back. Instead they sent her back with one of their own, who was himself taken prisoner, immediately showing that, obviously, they were supposed to kidnap the girl, and had missed their chance.

Nevertheless, Mackiernan persisted with the fixed idea that he was being welcomed into The Land of the Thousand Buddhas, and would soon be led to the throne of the Dalai Lama at the roof of the world. He would follow in Harrer's footsteps, whom he undoubtedly admired for his virile conquest of the spiritual heights. What dreams must have been flashing through his mind as he persuaded his fellow travelers to all proceed, unarmed, hands high, waving the flag of surrender? This gambit was all contrary to his CIA training, and against the will of his fellows. What exactly, one must wonder, was he trying to surrender to? Perhaps it was his belief that in this world, there could be a splendid utopia of peace, ruled by a God-King who could grant one safe passage through his land, and indeed, all the way to a mystical Valhalla.
Top
Post Reply
1 post • Page 1 of 1