I think it's fair to say that "meditation" meant "thinking deeply" until the Maharishi Mahesh Yogi taught us it was something different, something incredibly cool, something better than LSD, something that Donovan, Mia Farrow, John Lennon, Paul McCartney, George Harrison, and every other cool, hip, gorgeous human being would do to, like, get off this human plane! 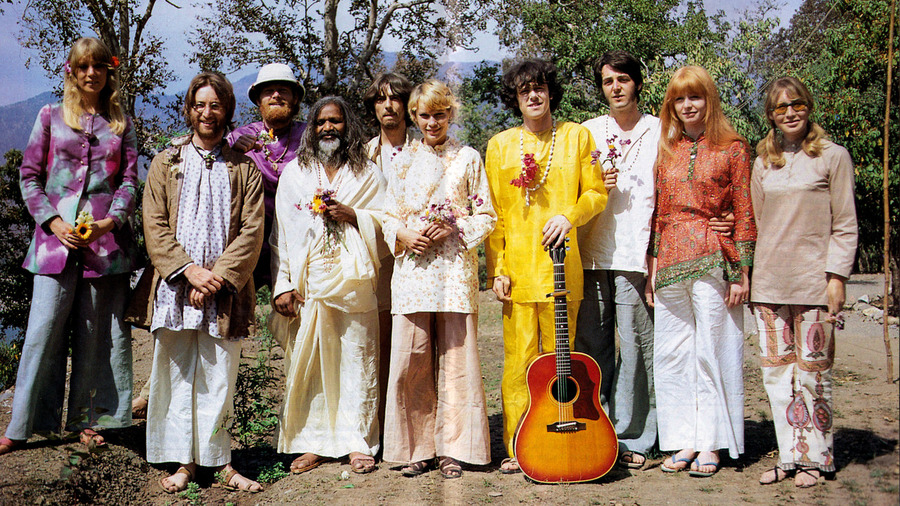 I notice that Ringo is not in this picture, and that was apparently because he didn't like the food and the bugs in India. He also received some advice from his Uncle that may have instilled caution in the most straightforward of the Fab Four: "Ringo’s uncle had advised him to be careful (“He’s after your money, lad”) and Ringo himself spoke for the common man when he described the compound as being “like Butlins”.

Meditation and tripping were thus united in the public mind, and it wasn't long before the USA was awash in gurus. We were visited by Satchidananda (old with a beard, hung out with hippies), Maharaj Ji (young with a sweet tooth, hung out with his relatives), Sri Chinmoy (middle aged, always smiling, hung out at the United Nations), and of course, our own homegrown holy man, Ram Dass (ageless, hung out with everyone). If you had taken acid, and thought it meant that the new world was inevitable, then you would definitely have to try meditation. The Maharishi was the first to commodify the product. A mantra with initiation cost like $100 or something. But a hit of acid was never more than $2.50, a bag of Mexican reefer was $10, and the latest vinyl rock and roll album was $4.00. So meditation was a luxury item. It wasn't clear that you could just do it yourself, and I guess that's not really clear to this very day.

One thing I can say with some confidence, however, is that only living beings meditate. If you believe that spiritual beings in heavenly realms meditate, good for you. Keep on believing it -- you can't prove it, I can't disprove it, and you can't get odds from a bookie on which one of us is right, because no one is ever going to know if you're right or I'm wrong. That's the advantage of talking about shit no one knows about. You can't be proven wrong. Which is why all charlatans tell you they know what no one can disprove. It's a safe position.

But working with shit we know, I can say with some confidence that people meditate. I don't think animals meditate. We have a feral cat that lives in our back yard, and I'm sure she doesn't meditate. She eats, hangs around waiting for food, kills doves, and flees from every imagined danger. She also sleeps. But I'm sure she never sets aside a little time for self-care. Poor baby. Probably do her some good, but she doesn't know about the Maharishi, and I'm not giving her any LSD. Life's hard enough.

The answers will be varied, but science can help us narrow them down. The scientists have been watching the meditators, asking them questions, scanning their brains, examining their diets, their sleep patterns, their work productivity. There seems to be an emerging consensus among scientists that "meditation" is good for you. But there's also an emerging body of study that shows that sometimes meditation is bad for you. Makes you anxious, makes you feel weird, makes you want to meditate all the time. Makes you hate life and your stupid relatives and your stupid job. Makes you think that shit is stupid.

Well, that's not so goddamn surprising, is it? The Buddha did all kinds of crazy shit, including giving up a fortune, a kingdom, a beautiful wife and a newborn son to go meditate. I bet he started meditating before he split the castle scene, and gradually he started thinking all this screwy shit -- "I'm gonna die. Everyody's gonna die. We all get sick. We all get old. I'll get old. I'll get sick. I'm gonna die. Oh shit, oh dear!"

Kind of like the Beatles, y'know? Here they have the world laid out before them, a career such as no one has ever known, and what do they do? The White Album. Oh. My. God. Talk about anti-commercial. No pictures, no words, just a white double sleeve, with two discs of vinyl loaded with incredible stuff. Since McLuhan had taught us all that "the medium is the message," we probably all got their communication -- the blank page of your mind is the canvas this album appears on!

While the Maharishi was selling meditation for $100 a hit, you could get the White Album, a bag of weed, and a hit of acid for under $15. Talk about not having to make a choice. Furthermore, meditation instructions were everywhere: "Turn off your mind, relax, and float downstream -- this is not dying ..." The Byrds had their own angle, "Eight miles high, and when you touch down, you'll find that it's stranger than known." Leonard Cohen -- "Suzanne takes you down to her place by the river, You can hear the boats go by, You can spend the night forever..." And of course, The Grateful Dead, "Saint Steven with a rose, in and out of the garden he goes / Country garden in the wind and the rain, Wherever he goes, the people all complain."

The specialists, the gurus and the spiritual technology sellers just skated along on this surface. L. Ron Hubbard was the guy to emulate, because he had figured out the neurotic American market for self-improvement. He figured out that white American males are so competitive that, if he created a ladder of never-ending achievement, charged people to climb it, and gave people prizes for reaching certain levels, that he could have people climbing up into the sky forever, paying him an endless flow of cash for the privilege of stressing themselves out competing to achieve "clear."

Speaking of "clear," I do love that Leonard Cohen allusion to Scientology tucked into "Famous Blue Raincoat":


Yes, and Jane came by with a lock of your hair
She said that you gave it to her
That night that you planned to go clear
Did you ever go clear?
https://www.youtube.com/embed/tAmQgI_Mun4

Did you ever "go clear?" Who was he singing to when he asked this? According to this article, Cohen told the BBC in 1994, "I always felt that there was an invisible male seducing the woman I was with, now whether this one was incarnate or merely imaginary I don't remember. I've always had the sense that either I've been that figure in relation to another couple or there'd been a figure like that in relation to my marriage." We don't get any more information than that, but that's enough. The asshole who was trying to seduce his woman was some schmucky Scientologist! I snagged my wife from an amateur Scientologist (they always get the best women -- you have to steal them -- don't laugh).

This explains why meditation became so very popular in the seventies. Drugs became too dangerous for the chicks. Drugs became something you got from drug dealers. Drug dealers were dangerous. They got busted, they went to jail, they had sketchy lifestyles. But spiritual people, ah, now they had proper lifestyles. Clean sheets, nice backyards, nice cars, nice visitors.

Meditation became a pose for posers. The best image of this posing is in the great Peter Sellers film, I Love You Alice B. Toklas, where Sellers' character, a Beverly Hills accident lawyer, tries hard to become a hippie. Here he is walking on the beach with his guru.
https://youtu.be/G-MHhiZf0M8 Everyone who has a guru should watch this scene, and the whole movie.
Last edited by Admin on Wed May 22, 2019 5:50 am, edited 2 times in total.
Top
Post Reply
1 post • Page 1 of 1